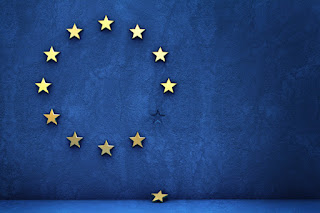 Apologies to John Oliver for hijacking his line for my title.

Yesterday the citizens of the UK voted, in what is widely considered a referendum that wasn't really even needed, to leave the European Union. While the EU leadership in Brussels has never been accused of efficiency nor having exceptional long-range vision, this is quite a move. Some in the UK are extolling the virtues of not having to deal with "immagrints" [sic] while others are applauding the opportunity for self-determination. Those of us in the USA can appreciate the self-determination aspect, after all we had our own "exit" referendum back in 1776.

The significantly shortsighted aspect that I see in all of this is that the UK has not removed themselves from the trade regulations of the EU, they've only abandoned any opportunity to make changes to the trade regulations from within. If they want to sell anything to the EU they'll have to follow the EU regulations, it's that simple. Yes, the UK has been paying a significant amount to the EU as a participant, but the monies paid in have opened up markets and returned dividends over time. Immigration isn't likely to change a significant amount, as England has such deep roots all over the globe due to their prolific historic colonization activities. The immigrants that have been coming in from other EU countries have largely been skilled laborers, not pond-scum looking to survive on government benefits.

For now we watch the financial markets reel from the shock and work to dampen out the volatility created over the past 24 hours. Personally, I have my fingers crossed that the GBP doesn't recover too quickly as I've got some upcoming financial obligations to cover in England and would at least like to enjoy an advantageous exchange rate if I am able.

It will take at least two years after the UK formally notifies the EU that they intend to exit. It could be months before they issue that official notification. Over that two year period negotiations will take place as to how the UK will interact with the EU after the exit. Those terms will be largely determined by the EU members without the input of the UK. Furthermore, should two years not be long enough, the negotiating period can be lengthened by a vote of the EU members.

It's not going to be a quick fix, and I'd wager that a new referendum in a year's time would produce different results now that people in the UK have some level of understanding as to what it is they actually voted on yesterday.
Posted by Kit Cosper at 1:31 PM No comments:

A shout out to my source for the best dog chews I've found. Michigan Antler Art sells what are apparently cast-offs as chews for dogs. I have only found one article that says to avoid them, and that was due to the fact that giving them to your dog will eliminate venison as a "novel protein" should you need to investigate different food sources for your dog in the future due to allergies or skin conditions. (My personal opinion on this is that there are so many foods on the market these days with proteins ranging from beef to fish that the risk of eliminating venison from the list poses a negligible and tolerable risk for pet owners.)

Rawhide isn't digestible, pig ears are greasy an average of 3.2 seconds, hooves are smelly and bully sticks are a bit much for smaller dogs (not to mention having 4 of them laying around would create quite a scene.) Sterilized bones are an option, but size becomes an issue with them as well. We do give pig ears on occasion, usually as an in-crate treat, as the greasiness has the potential to cause stomach upset.

At first I ordered medium density split antlers. My guys cleaned them out and gnawed them down in a matter of a couple of weeks. The next batch or two I selected hard splits. They lasted about twice as long. My most recent order was a fortuitous mistake, as I wasn't paying close attention and ended up getting whole (un-split) antlers. They've been working on them for several weeks and have chewed one down about half-way and have a good start on the end of another, with two that still appear untouched.

We've noticed, and our veterinarian has commented, that their teeth are markedly cleaner. This leads to better breath and healthier gums. One of our corgis was approaching the need for a dental, but after having antlers to chew on the past several months his teeth are almost as clean as a young pup. When I balance that against the moderate (not inexpensive, but not outrageous) cost of the antlers I think they provide excellent value.

Have you seen any damning evidence against quality antler chews?
Posted by Kit Cosper at 1:12 PM No comments: 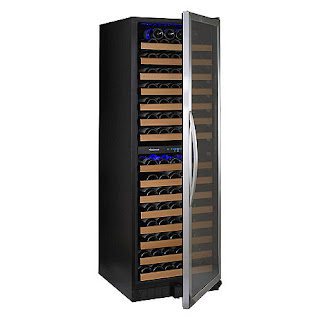 I purchased a freestanding wine cooler (wine cellar, if you prefer) from Wine Enthusiast in 2011. It wasn't the top-of-the-line, it was their own brand (N'Finity) and my assumption was that if it was good enough for them to put their name on it then it myst be a reasonably solid unit.

Last summer (2015) it formed a block of ice on the rear wall inside the cooler. In hindsight this was the beginning of the end. Over course of the last six to eight months the unit has labored, running continuously while the internal temperature crept slowly upward to ambient. Initially I thought the coils were in need of cleaning, so I unloaded the contents of the cooler, fortunately not quite the 170 bottle capacity, thanks to the vagaries of inconsistent bottle sizing in the wine industry. After moving ~150 bottles (three and four at a time) I maneuvered the unit away from the wall and cleaned the coils thoroughly, checked the drain pan, wiped down the interior and exterior, and moved it back in position. I re-loaded all of the wine (not having enough counter space to allow 150 bottles to sit around and still have a functional kitchen) and waited a few hours to power the unit up so that the refrigerant would have plenty of time to settle in the system.

Started the unit up and let it run overnight. Internal temperatures substantially identical to ambient temperature. Thinking that there's a lot of thermal density in those 150 bottles of liquid I give it another 24 hours. No detectable change.

Cue the appliance repairman. I describe the failure mode (starting with the ice block a year ago) and he starts poking around. No refrigerant, appears to be a failed condenser. Since this is a sealed unit (read: not designed for serviceability) repairing it won't be inexpensive, but the repairs will convert it to a completely serviceable unit if/when any future issues arise.

Repairman calls Wine Enthusiast, technicians are not available so he leaves a message, tells me he will call when he hears from them.

A couple of hours later the repairman calls. Do I want the bad news or the worse news? Bad news - they no longer have parts because the systems were such pieces of crap that they discontinued that design. Worse news - I now own a large paperweight as no one has parts available.

I have no reason to doubt the repairman, he's with a company that we've used several times over the years and they always do excellent work at fair rates, but I want to see what Wine Enthusiast has to say to a customer who has purchased a fair bit of hardware from them, this being one of two wine coolers (the other belongs to a family member) not to mention a long list of other items.

So I send an email, describing the situation, telling them what the repairman said, and asking if they can help. They reply after a couple of days with instructions to give them a call. So I call. The tech is apologetic and reiterates nearly verbatim what my repair guy told me. Nothing they can do. I ask him about their Complete Satisfaction Guarantee (so boldly posted in their website.) He says there's nothing they can do. I ask if he has any idea what they mean by "Complete Satisfaction" and he doesn't. I express my discontent over having a large, 250 pound paperweight and the fact that they are selling disposable junk instead of quality products that should last more than four or five years. He finally says that we can probably find a suitable condenser from a local refrigeration supply house and offers to send me schematics and parts lists immediately via email.

I fill out contact forms on their website. Nothing. It's obvious that their "Complete Satisfaction" guarantee isn't worth the electrons that it takes to display on your screen and the company could really care less about customer service. This isn't to say the folks answering the phone and email don't care (current evidence to the contrary.) But whomever conceived advertising "Complete Satisfaction" is suffering from cranio-rectal inversion and needs to read the book "You Will Be Satisfied" so they can learn a thing or two.

That said, if you're looking for a wine cooler, or a corkscrew, or anything else that has to do with wine, do yourself a favor and look anywhere other than Wine Enthusiast. Their products are crap and their service is crappier.

I'm in the market for a free-standing wine cooler, capacity of around 170 bottles (no larger, as they won't fit the space I have available.) Let me know if you have any suggestions.

Posted by Kit Cosper at 5:27 PM No comments:

An affluenza swimmer who attends Stanford gets 6 months for sexual assault (I suppose because he only managed to penetrate her with a foreign object and didn't accomplish same with his own genitals.)

Meanwhile we're sending people away for years to life for growing marijuana for their own use.

Her sentence is for life, and she didn't break any laws.

America will be great when our laws are fair, just, and based more on logic than on the false morality of the ruling party and justice isn't for sale to the highest bidder.
Posted by Kit Cosper at 6:01 PM No comments: