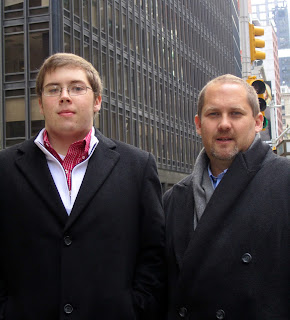 Generally speaking I don't post much here about my immediate family (the previous post notwithstanding, I see it as much a PSA about organ donation as a post about my wife.)

But a proud father has to brag a bit every once in a while.

My younger son, the middle child in the family, closes the book on his undergraduate studies tomorrow. He's graduating with a double major in German and Political Science and will be attending grad school in London this fall for a Master's in International Relations. After that he's thinking about law school, but he's keeping his options open in that regard for now.

He's never had to call me for bail money and has posted solid grades while enjoying a robust social calendar and completing his studies in four years. He even made Dean's List a couple of times. Here we are in Manhattan his Senior year of high school.
Posted by Kit Cosper at 11:26 PM No comments:

Organ Donation - The Gift of Life

Anyone old enough to hold a driver's license has been informed to some degree of organ donation. Many people consent to the program and indicate their participation with a small icon on their license. In the event of death this tells the medical team in attendance what to do. Assuming no underlying issues one organ donor has the potential to help save or improve the lives of as many as fifty individuals. In addition to the obvious organs (heart, lungs, liver, kidneys, pancreas) other tissues such as corneas, tendons, skin, and bone can also be transplanted. Even with nearly 51% of the 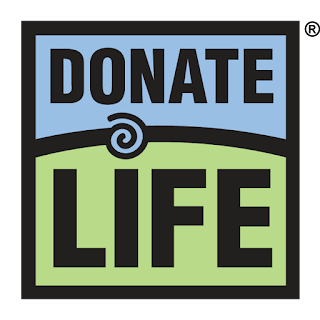 population of the USA listed as organ donors 22 people die each day due to the lack of timely organ donation.   An often overlooked and nearly universally misunderstood aspect of organ donation is the role of live donors. Most often used for kidneys, live donation can also be successful for partial transplantation of liver, lung, and pancreas. In the former case the donor donates their "spare" kidney, in the latter cases a portion of the organ is transplanted and the organ regenerates itself, returning to full function. After the initial recovery period live donors generally have nothing more than a scar to remind them of the incredible gift they have provided.

While post-mortem organ donation enjoys tremendous success (Nationally, kidney transplant success rates approach 95% overall) live donation results in even higher successful outcome percentages in addition to greater efficiency. In cases of live donation the kidney is removed from the donor and, quite literally, "walked across the hall" to an adjacent surgical suite where it is immediately placed in the recipient. This minimizes the shock on the organ and, in most cases, it never has an opportunity to realize that it has a new home, so it just keeps on functioning. With cadaver kidneys they have (more than likely) been transported some distance using cold-preservation techniques, resulting in a temporary shutdown. It may take from several hours to a couple of days for these kidneys to "wake up" and start performing their assigned task, which adds additional stress on the recipient in the form of supportive therapies such as dialysis. The most troubling aspect of cadaver donation is timing. Many people are killed in car crashes over the weekend and statistics show that organs that become available between Friday evening and Sunday morning stand a 25% higher risk of not being utilized.

Live donation has many other benefits as well. In most cases a transplant involving a living donor can be scheduled based on everyone's mutual convenience, often mitigating, if not completely eliminating, any peripheral health concerns that might be present. It also allows the transplant team to maximize the utilization of the native kidneys, thereby reducing the amount of time that the recipient is forced to take immunosuppressant drugs, avoiding their side effects for as long as possible.

Using a concept known as paired exchange live organ donation has produced "transplant chains" - the longest of which currently stands at 51 transplants! Donor pairing takes incompatible (but qualified) donor-recipient pairs and matches them with other donor-recipient pairs that are in the same situation. This graphic from the Living Kidney Donors Network illustrates how a simple case of two incompatible donor-recipient pairs can be matched to create two compatible donor-recipient pairs. Adding an altruistic donor (meaning someone who comes forward to donate a kidney without a direct link to a potential recipient) generally sets off a chain of transplants, resulting in multiple matches. There are over 100,000 people in the United States awaiting kidney transplant and millions of potential donors. Live donation presents minimal risk to the donor and no medical expense related to the donation or any future concerns that might arise due to the donation.

The most compelling example I've seen can be found here, six individuals who either donated or received kidneys participated in the Ragnar Relay as team Run Kidney Run to raise awareness for live donation. Six people running 200 miles - that's well over a marathon per person. Each of them with one kidney. I think that's pretty convincing evidence that donating a kidney won't have a significant negative impact on your future. It may, however, give you an overwhelming feeling of having made a significant difference in the world!

If you've read this far you're probably wondering why I chose to discuss this topic. Well, my wife suffers from PKD and is in end-stage renal disease. We have been fortunate enough to have several friends and family members undertake the screening process for potential donors. Even if one of those turns out to be a perfect match the process has shown us that the need for advocacy will not end until the waiting list disappears.
Posted by Kit Cosper at 7:50 PM No comments:

Someone posted photographs on Facebook today of a newly remodeled locker room for a college basketball team. It's a small NCAA Division 1 program that has made a couple of appearances in the tournament over the years. The school has about 10,000-12,000 students. A reasonable size school. I offer all of this by way of perspective.

Let that sink in.

Do you need a moment more?

In what universe does it make sense to spend money on facilities to accommodate people who will never use those facilities? That's like putting a wet bar in a Baptist fellowship hall.

OK, maybe that's not the best analogy, but you get the idea.

Sometimes rules need to be applied with common sense. This time that's definitely not the case.
Posted by Kit Cosper at 11:49 PM No comments:

Well, they say the road to hell is paved with good intention. By that metric I'm well on my way. I completely forgot about this little project, which is a shame because I've experienced some real doozies over the past 6 years or so. Things have changed a bit, so I'll try and keep up a bit better (I could hardly do much worse!) and share the more "interesting" things that come my way.
Posted by Kit Cosper at 1:32 PM No comments: